Guest blog post from Rebecca, an English for Speakers of Other Languauges (ESOL) teacher at Tower Hamlets College, about the work her class have been doing on fuel poverty.
Fuel Poverty Action works with those affected by fuel poverty to provide support, information and resources, and plan collective action. If you’d like us to visit your group, please get in touch fuelpovertyaction[at]gmail.com.

I heard that another ESOL teacher was doing some work with the Fuel Poverty Action campaign and was interested in right away, because this issue definitely affects our adult students, who find that all other problems are made worse by difficulty in speaking English.
Also I thought it might be a topic where we might actually be able to make an impact. ESOL classes quite often look at big and serious topics like housing, benefits and immigration, since these all affect students’ lives, but it’s often hard to take action that might make a real difference.
Following suggestions from Dermot at English for Action, we began by brainstorming the causes and consequences of Fuel Poverty. We put these onto a ‘problem tree’ and used it to make sentences. Because we had done a lot of speaking (the students had plenty to say on the topic) it was easy for the students to read a simplified version of the ‘Energy Rights’ leaflet.
Next we had a visit from Izzy who talked us through the issues and answered some questions that the students had. We made some questions for Izzy on topics like key meters, negotiating bills, and legal rights.
We then started looking at solutions to the problem and considered what actions we could do as individuals and as a group.

Thanks Izzy and Fuel Poverty Action for all the support!
Rebecca

On the evening of Monday 27 October, over a hundred people piled into committee room 12 in the Houses of Parliament for the launch of Fuel Poverty Action’s Energy Bill of Rights. First revealed back in May at a protest outside the British Gas Annual General Meeting held just around the corner, the Energy Bill of Rights is an eight point charter that aims to re-assert what should be basic and standard rights to clean, affordable, democratically controlled energy for everyone.

END_OF_DOCUMENT_TOKEN_TO_BE_REPLACED 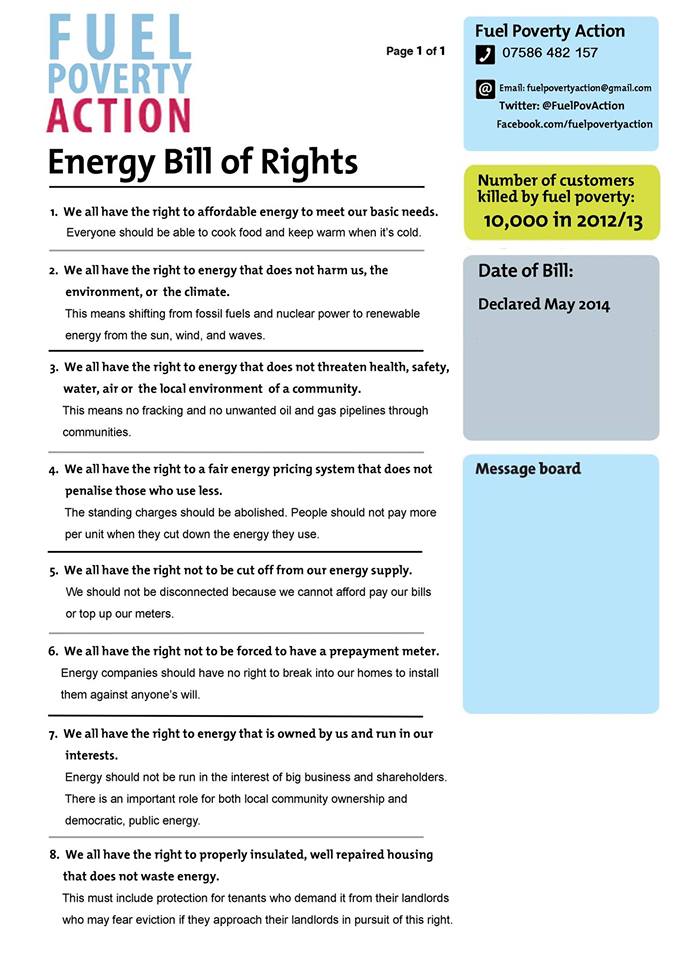 In 2012/2013 over 10,000 people died of fuel poverty. Millions more of us struggled to pay our bills, top up our prepayment meters, and were bullied by our energy companies because we owed them money we couldn’t pay. For many people meant going without heating or hot water during the winter, or it meant having our homes entered, without permission, by energy companies to install prepayment meters.
We want people to feel confident to take on their energy company and win. We don’t have to have this energy system where a few companies make billions and everyone else suffers. Another energy system is possible! We want this Bill of Rights to give us all the confidence to fight for that fairer, affordable, sustainable energy system.
We launched the Energy Bill of Rights with support from John McDonnell MP and Caroline Lucas MP in October 2014 in a committee room packed to its 100+ capacity. A range of individuals and representatives of groups gave moving accounts of why this struggle is so important.

What does it mean?

The campaign is not for an abstract principle.  We are working to organize a self-help movement of people who are in trouble feeding their meters or paying their bills, and their supporters, so no one has to fight the energy giants alone.   Please see our mini-guide to energy customers’ rights which is written to help customers, their friends and neighbours, and any organization – from local community centres to climate activists – to put an end to some of the most outrageous ways that we’re all being skinned by the companies.
That’s for a start – so people stop dying from fuel poverty.  In the end, we plan to build a movement strong enough to bring energy under democratic, public control, where people can make sure it is both affordable and sustainable for all of us and future generations.  And where landlords and housebuilders can be forced to make homes that keep us warm – not the stratosphere.  Besides the many groups already fighting “austerity”, we hope to involve transition towns and others concerned about the environment and climate who have not always connected effectively with people in poverty. This Energy Bill of Rights provides an excellent starting point from which to fight.

Who endorsed the Bill?

-Danny ‘I feel very strongly about this issue as I almost most starved last winter due to extortionate Energy Prices & the fact that I am restricted to use of an Electricity Key & Gas Card. Had to go to Food Banks 3 times & resort to extraordinary measures in order to survive … Literally had to make the choice between Heating or Eating !’

And groups and organisations including…

-Paul Nicolson, Taxpayers Against Poverty
-Haringey Federation of Residents Associations
-Brighton & Hove Energy Cooperative Services
-Biofuelwatch
–Fair Frome (economic, health, education charity in Frome including the Frome Food Bank)
‘We would like to add our name to support the Energy Bill of Rights as we believe that energy consumers are all entitled to affordable energy prices to meet their basic needs, and that people should not have to choose between affording payment of fuel or food.’
–Disabled People Against Cuts
‘It is morally wrong that 10,000 people should die from fuel poverty in one of the richest nations of the world and when energy companies continue to milk massive profits from people who have no other choice but to keep using their over-priced services.’
–Lambeth Pensioners Action Group (LAMPAG)
‘LAMPAG would like to support the creation of a new movement against fuel poverty and to endorse The Energy Bill of Rights and believe that  these rights should be protected or brought into effect immediately to prevent further  deaths and suffering.
We believe that this is important because it is appalling that fuel poverty should  exist in one of the richest economies in the world, that millions cannot afford to heat their homes to a safe level of warmth, that deaths from hypothermia have doubled in the past five year, that the Big Six energy companies continue to make a killing from a price-fixed energy market and that this government as much condones an energy system and economy which generates private profit at all cost and determined to keep it this way. We say “Enough is Enough”.  We need a change now.’
–Generation Rent
‘Poor quality housing, which is disproportionately found in the private rented sector, is a major cause of fuel poverty.  Generation Rent supports the Energy Bill of Rights which sets out the important core principles that are needed for a future energy market that is sustainable and works in the best interests of private renters.’
– World Development Movement
‘In a just world, everyone would have access to affordable, sustainable energy. But today, because corporate control puts the profits of the few ahead of the many, billions of people are locked out of energy justice. The Energy Bill of Rights says people must come before profits. We believe that applies all round the world. The Energy Bill of Rights provides a framework for wresting control of energy away from big corporations, to place it in the hands of people.‘ –Nick Dearden, Director,
-Warwick People and Planet
‘Warwick People & Planet stands for social justice and environmental protection. We oppose the fuel poverty thousands in the UK are subject to as a result of the ruthless profiteering of rogue energy companies, whose amoral conduct facilitates the deaths of the old, poor, vulnerable and disabled. We firmly believe that each and every one of us is entitled to clean energy that meets our fundamental needs, and wholeheartedly support the Fuel Poverty Action campaign and their Energy Bill of Rights. ‘
-WDM Shropshire
‘WDM shropshire members support the Energy Bill of Rights. No-one should die because they were unable to pay for heating or cooking bills.  It is unjust that a few large corporations make a lot of money from a basic daily human necessity.‘

Signed up and want to know what else you can do?