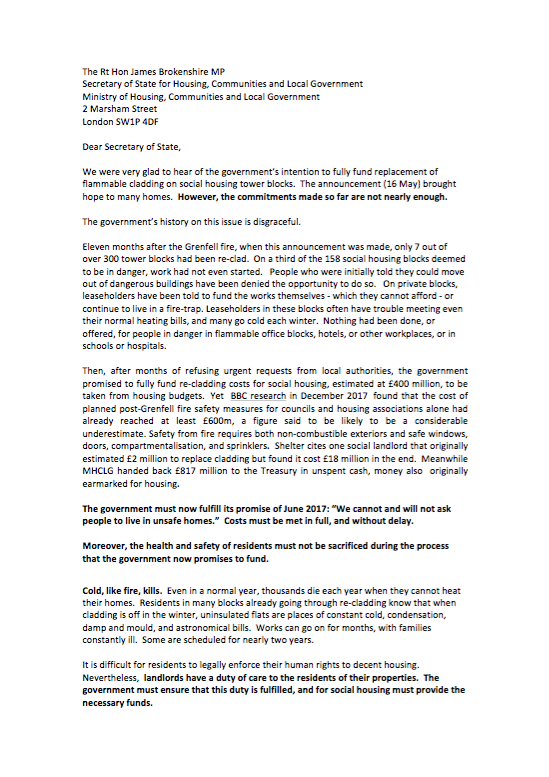 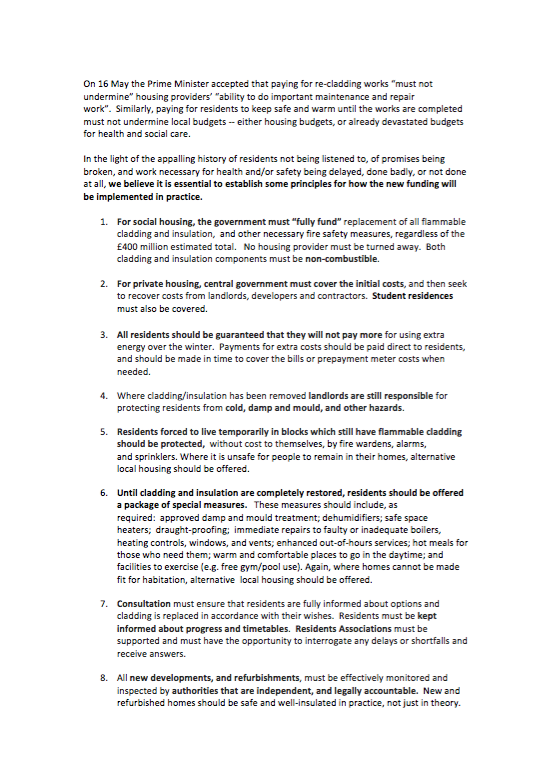 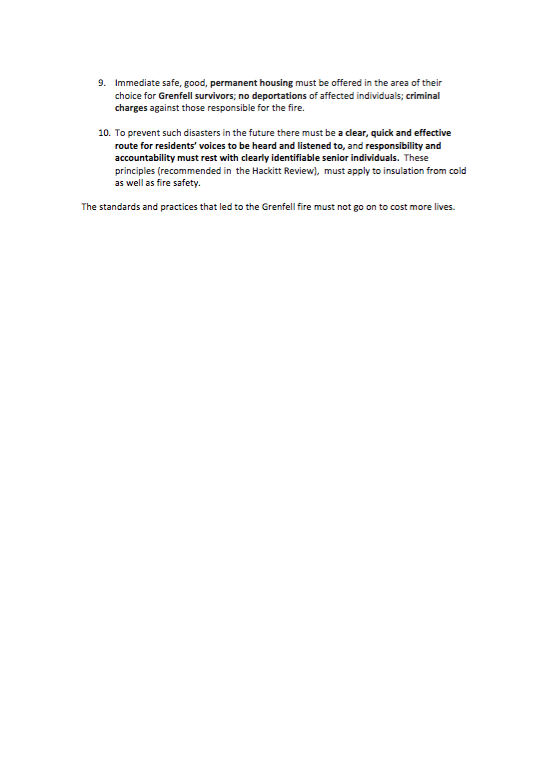 Besides killing 71 people and shattering many more lives, the Grenfell fire has shone a light into deep fault lines in UK housing, politics, and social relationships, all of them disaster areas that are set to cause many more deaths.  In memory of those who have died, the onus is on all of us to seize this moment.
On the front line are the Grenfell survivors, many still crammed into hotel rooms and fighting for permanent homes, the right to stay in Britain, or support to recover from devastating grief and loss.  Right behind them are the residents of other tower blocks.  People who’ve been told they must go to bed each night in a flammable building unless and until they can themselves find the money to replace cladding.  And people who have had the cladding and insulation stripped off their buildings, for safety, but who now find their homes exposed to freezing winds, and damp, for months, or even years.
Grenfell has exposed:

Small wonder that as cladding comes down from new or refurbished buildings, local authorities are finding that the glossy exterior has been concealing missing fire-breaks and insulation, faulty structural fixings, holes in walls and floors, and inferior materials – the basics are not there.
Critically, they have found insulation missing – a scandal FPA are very familiar with, as residents on new build housing estates contact us, unable to heat their homes.  Their homes have high EPC ratings – deemed good on “energy performance”, but thermal imaging shows where contractors have simply saved money by leaving insulation out.  UK homes – for this reason and because little is being done to tackle draughty, damp, and hard to heat older housing – are among the coldest in Europe.  Landlords’ legal obligations, such as they are, are not enforced, and the central government funding, which paid for health and safety officers, has been taken back by Whitehall.  Official standards for insulation, won over decades of pressure by energy and fuel poverty lobbyists, are still there, on paper, but are missing on the walls.
As the changing climate removes the blanket of Jet Stream protection which has until now kept the UK climate temperate, the first people to pay will be those on low incomes living in poorly insulated housing.  Many will pay with their lives.  Every winter thousands of people die in this rich country, because they cannot heat their homes.  Like fire, cold kills.
The Grenfell Inquiry, the Hackitt Review, all the meetings, all the demonstrations, cannot be allowed to lead to business as usual.  The present lifting of the cover on “the way things are done” gives us all  a moment of power.
At our meeting “Dying from Fire, Dying from Cold”, Ishmael Francis-Murray from the Grenfell community said, “ If we don’t get change through this, we never will. . .  Right now we have a chance.”
Change must begin with justice and security for Grenfell survivors – and with warm, safe homes for all whose buildings have been immediately affected by this disaster.  It must then reach further.

If you'd like to tell your story and speak out
about unfair bills, bad heating, bad insulation, and the dire situation with rising costs and falling incomes - the media are always looking for people to talk to - anonymously or otherwise.  If you'd like to help this way, get in touch here