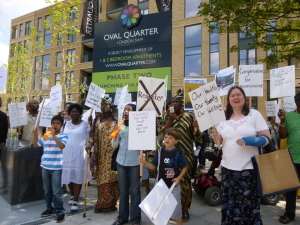 Fuel Poverty Action has been contacted by a number of tenants from social housing estates across London who told us that they are unable to switch their energy suppliers for heating and hot water  because their social landlord has ‘locked’ them in to buying from one supplier. In one case, residents of Myatts Field North estate have been locked in to buying their heating and hot water from e.on for 40 years under a Private Finance Initiative contract agreed by Lambeth council.

Last month, Fuel Poverty Action submitted evidence to the Competition and Market Authority who were calling for submissions looking at why people are not switching energy supplier. Fuel Poverty Action used case studies of these housing estates to show that residents are not switching because they have been prevented from doing so by their social landlord.
The residents we have spoken with have expressed deep unhappinessness that they are unable to choose their energy supplier and are stuck with the one that has been chosen by their social landlord. The social landlords’ reasons for choosing the particular energy suppliers are not clear to the residents, but getting the cheapest deal for their low-income residents, as they have the power to do, does not seem to have been a factor (former regulator Ofgas, replaced by Ofgem, suggests to social landlords that they could set themselves up as energy suppliers and supply energy to tenants at cost price). When residents have made complaints about the energy supplier monopoly and other problems with the energy supplier to their social landlord, they have not received an adquate response. We are in touch with residents from Myatt Field North estate in Lambeth, Pembroke Park estate in Eastcoate, and a Hackney estate.
A resident from Myatts Field North estate explained: “My experience has been traumatic along with the rest of the estate. Since moving into this property in May last year I am still experiencing problems. Intermittent hot water has been a problem throughout and after the petition etc they have finally admitted that there is a problem with our block in particular being starved of hot water because they cannot balance the system…This was when residents had enough and we started the petition etc. If we were not chained to this contract many, if not all of the residents would move supplier. Even the private residents are livid and complaining about the poor service.”
A resident from Pembroke Park estate said: “As social housing tenants we would like to be treated fairly and not discriminated against. Free holders and lease holders [are not locked in to buying their heating and hot water from Vital Energi] whereas social housing tenants, many of whom are low-income and have disabilities, are locked in to this energy system. We hope whoever is responsible will take this into consideration. It costs £50 for hot water and heating in our home [four bedroom semi-detached house] for 9 days that is the reality.
“We would be happy if someone could help us to change the supplier because A2D [housing association] won’t let us do this.
“We been living in that house for four years now and for all these years, none of us ever use the bath although my husband needs to as a disabled person and my mum as well as she is 75yrs. That is affecting our freedom and making me argue with my family “don’t let hot water running it will cost etc…” We have no rights to change the supplier. I want to explain that, after the high amount we are paying, in a lower temperature we still need to cover our self with blankets. From the very first bill we have received, we started to chase them but, nothing has happened yet.”
The government’s solution to the fuel poverty and energy bill crises has been a mantra of ‘switch, switch, switch to bring down the bills’. Whilst we know that constantly switching will not lower energy costs to an affordable rate, we’re concerned that some social tenants do not have this option to try to get some of the better deals.
Whilst we recognise and welcome district power heating systems as being much more energy efficient, we’re very concerned that social landlords are locking their tenants into energy deals that don’t provide their tenants with the low cost energy they need. These energy monpolies are forcing tenants deeper into fuel poverty as they do not have the option to look around for cheaper deals and discounts.
Social landlords should be using their role to help alleviate poverty and empower their residents; localised energy could be a part of this if these social landlords were to find the cheapest deal for their tenants and support community-run energy initiatives. Instead, they are making bad deals with energy suppliers without consulting their tenants and are failing to respond to tenants’ concerns.
We’re supporting these residents to challenge their social landlords and these energy monopolies. We’re organising a meeting so that tenants from across London affected by energy monopolies on their estate can meet, exchange ideas and make plans. Get in touch with us if you’d like to be involved in collective action against fuel poverty or if you have an issue you’d like support with! [email protected]