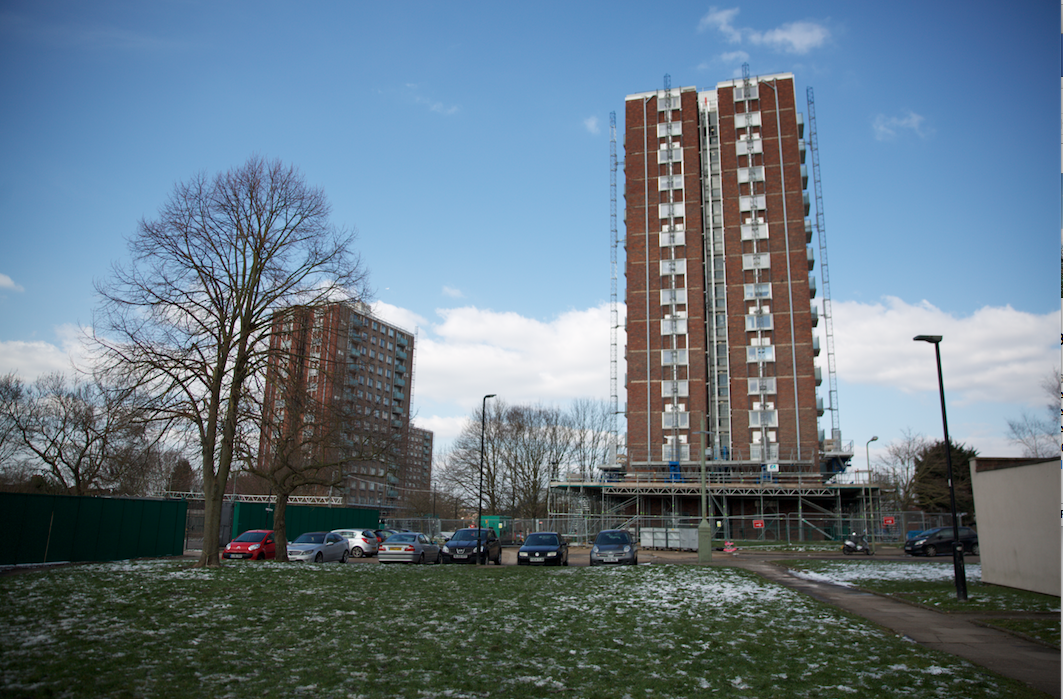 On the anniversary of Grenfell, I have been asked to write this blog post describing what its like living in a high-rise building with dangerous cladding on it like Grenfell had.  My name is Elizabeth and I live in a 22 story high rise housing association block in Salford, managed by Pendleton Together and owned by Salford council.

The block has flammable cladding. And a year on from the tragedy it still has the cladding on it except for the first three floors. And it’s been terrible living here since the tragic events for several reasons. Since the Grenfell fire me and several residents haven’t been able to sleep well and have been too scared to sleep, especially in the first few weeks. We were first promised that if anyone wanted to move they should just go to the Housing Association and they would look at our cases fairly. But unfortunately many residents, even the ones with kids on high floors and people with health problems and people with doctors letters recommending they are moved, have been denied a move. This has upset residents a lot since many kids and people with health problems died in Grenfell .

We have been told that removing the cladding is going to take two years and that they’re looking at installing sprinklers in the all the high rise blocks. A month after the Grenfell  fire the mayor  of Salford, Paul Dennett , said he would remove the cladding and that he wouldn’t wait for the report from the national and local government on testing whether the cladding that’s on our blocks is flammable like Grenfell.  And that he would borrow £25 million pounds to get the cladding off and keep residents safe.  Unfortunately, Pendleton Together only removed the first three rows, and a year later my block and many other blocks managed by Pendleton Together still have the major part of the cladding still on. Cladding only came off for the camera news crews and work stopped when the camera and TV news crews stopped filming.

There was a meeting I attended about a month after the Grenfell tragedy, which was held in Salford youth theatre, where the deputy mayor and other various speakers came to talk about Grenfell. When the meeting got heated the deputy mayor of Salford said we should be thankful he came, as he didn’t have to come to the meeting to let local residents know what the Salford Council was going to do about our unsafe home. He stated that the Salford council only had £25 million in its reserves, unlike Kensington and Chelsea, the council that the Grenfell Tower falls under.

In my block there is an internal fire alarm. When it goes off it only rings in the two exit stairwells which are located at both ends of the building, not the hallway, not the flats as it’s not connected to ring all the fire alarms to alert residents there is a fire in the building and to evacuate. The fire alarm is so quiet because the sound is coming from the stairwell. When it goes off, many residents don’t hear it. I and others have complained about that but nothing has been done.

We have had four fire alarms where residents had been told to evacuate the building and many residents were still inside with their kids and said they didn’t hear it. That’s no surprise since nobody lives in the stairwell.  I slept through one fire alarm as I couldn’t hear it as I was sleeping and it’s too quiet. If you have the TV or music on you might not hear it, or if you’re sleeping.

Secondly we have no fire blankets or small fire extinguishers to put out small fires, like many flats have for safety.

Thirdly we have no Tenants Association due to the fact the housing association locked us out of the community room and said not enough people attend the meeting. We usually have between 5 and 10 people at our tenants meeting, but they said it’s not enough. So we can’t make an official complaint as the Tenants Association meeting as we aren’t official. It’s been like that for two years now. Our community room has never been open to the tenants officially, it’s been used by the cleaners and by other blocks for their meetings, which is very unfair.

If one tenant types a letter expressing the complaints of several tenants, the Housing Association will target the person whose address is on the letter and say that they’re the only one complaining. We have to put a resident’s address on the letters as a reply address, as the community room doesn’t have an address or letterbox,  that was binned after the refurbishment

We also have very expensive heating system called the NIBE system , that many residents can’t afford and that other housing associations have had to rip out due to expensive bills that it causes  for residents. Residents have complained about the NIBE but the Housing Association has just blamed the residents and said they haven’t use the NIBE properly.

The major refurbishment of our block included an electricity installation, and it’s caused many power surges that have tripped the electricity in my flat and others’ flats.  My cooker which was only a year and half old tripped my electricity and cut all my electricity off in my flat due to a power surge.  I called out the housing association, they sent an electrician who said it was my cooker. I then called the manufacturer who tested my cooker and said there was nothing wrong with it. My friend who lives in another flat also had problems with her cooker ever since the electricity refit. Her cooker is not working properly. We have never been offered any compensation and being unemployed I had to pay the bill just for the manufacturer to tell me there nothing wrong with my cooker.

Grenfell residents and their blog was complaining about the power surge since their refurbishment. It’s really worrying that we having the same problem. As it’s strange for a fridge freezer to catch fire. Rumours are that it’s the electricity surges and the upgrade of the block that made the fridge catch fire. I can’t know for sure but I don’t believe that fridges randomly catch on fire .

After Grenfell I don’t trust the Tory Government , my local council or the Housing Association.  It’s disgusting that a year after Grenfell many residents haven’t been rehoused.  And that residents who live in high rises like Grenfell with this cladding are being ignored. Its stinks of class warfare to me. Our lives don’t matter in these austerity times.

The housing association lastly have put fire marshalls who are meant to walk the floors 24 hours a day, but many residents have complained that they are always downstairs on the ground floor and never seen walking the floors. If the fire alarm goes off they are meant to run up stairwells , go on each floor  and alert residents to evacuate the building, but in practice they only seem to be on the second  floor or on the ground floor when the fire alarm has sounded, which has made many residents feel unhappy and unsafe.

These are the reasons why many residents are unhappy living in these high rises, because their problems aren’t being addressed and they are being denied a move to safe accommodation.

On Saturday 19th March 2016, Fuel Poverty Action came together with local residents from Myatt’s Field South, and pensioners from Lambeth’s Pensioners Action Group and Older People’s Alliance to stage a Warm Up in Lambeth library, threatened with closure, to demonstrate how vital a public resource it is, especially for people living in fuel poverty. Warm homes for all!
Huge thanks to John Lubbock for coming and filming the action. Watch the film and check him out on Twitter!

At 11am on Saturday local activists gathered at Brixton Reference Library to protest fuel poverty with a “Warm-Up”. After handing out leaflets and chanting slogans like “Warm homes are a right, Here to stay, Here to fight” in Windrush Square, they moved into the library and occupied the foyer for an hour. They sought to highlight that Lambeths’ libraries are a lifeline for many people, providing warmth, community, and access to vital services, and yet they’re threatened with closure. This will only exacerbate deaths from fuel poverty, which hit 43000 in the winter of 14/15, whilst the Big Six rip off the public by £1.7 billion a year. The action was called and organised by Fuel Poverty Action (FPA), Lambeth Pensioners Action Group (LAMPAG), Lambeth Older Peoples Alliance (LOPA) and Myatts Field South Tenants and Residents Association (MFS TRA).
END_OF_DOCUMENT_TOKEN_TO_BE_REPLACED