A member of our group has recently returned from Germany to learn all about energy and housing struggles in Germany and other European countries.

Earlier this year we were invited to attend the ‘BUKO’ conference in Leipzig, eastern Germany to speak about our campaign. We were invited by, and to speak alongside, a left group called ‘Fels’ based in Berlin who were part of the recent coalition in Berlin who very nearly succeeded in buying back the city’s electricity grid from private Swedish company Vattenfall who had hiked prices 21% in 2 years whilst blaming the costs of renewables (despite just 1.4% of the city’s electricity coming from renewables).You can read more about the energy referendum here: http://bit.ly/1q3G91n

In late May and early June a member of our group finally made the trip over to Germany for an inspiring 10 days of meeting campaigners and activists working on issues around fairer energy, housing and forced evictions, refugee rights and anti-racism in cities around Germany.

The first stop was Leipzig for the ‘Everyone or Nowhere!’ themed BUKO conference. Two of the big topics at the conference were housing struggles (with forced evictions a big issue in Germany currently) and refugee rights, with many refugee activists present at the conference.
Fuel Poverty Action were kindly invited to speak on the opening night panel alongside 4 other international activists, where I spoke for 5 minutes about the fuel poverty situation in the UK and our campaign against the Big Six and for affordable, sustainable, public and community-owned energy. There were loud gasps from the audience when we spoke about how 10,000 people died in the UK last year from cold homes. There was an incredibly positive reception from people at the conference towards Fuel Poverty Action’s work.
Over the weekend dozens of incredible workshops were put on. Comparing and learning from the housing situation and housing struggles across Europe happened every day. Hearing from anti-evictions activists in Spain, Germany, Greece, Romania, Italy and France was inspiring and shocking and there was lots of useful information and tactics for us all.
In Spain there is over 60% youth unemployment and forced evictions and electricity disconnections due to falling behind on payments has become increasingly common. The inspirational ‘PAH’ movement work together to stop evictions and to re-house those who have already been made homeless.
During the conference there was also a ‘Right to the City’ march combining messaging around affordable housing, with rights for refugees.

Right to the City march, Leipzig

Right to the City march, Leipzig
I then went on to other cities in Germany to speak (in Berlin, Hamburg and Frankfurt) about Fuel Poverty Action and the situation here in the UK, comparing it with Germany. For example, in the UK energy providers prefer to enforce prepayment meters and leave customer to “self disconnect” when they can’t afford to top-up rather than disconnect customer, whereas over in Germany 300,000 electricity disconnections are made every year! 20,000 of these are in Berlin. The difference however is that heating costs are generally included in the cost of rent, meaning that if you can afford rent you can afford heating too (though with rising rent prices in Germany, many people can’t afford rent).
Over the course of 10 days I spoke at 5 events about Fuel Poverty Action, reaching hundreds of people. It also lead to interest from freelance journalists who wanted to write about the issue.

A poster advertising our workshop in Frankfurt. Groups in Hamburg were keen to think about international links about energy. For example, the German company RWE owns the energy supplier Npower.
There was a lot of important information and tactics from the week, but here is perhaps the most important nuggets of info:

The main thing that I came back to London with was the sense that we have nothing to lose from fighting inequality, austerity and our profit-at-any-cost system and those who support it and profit from it. We have everything to gain from fighting back, joining each other’s struggle and working together when it makes sense to do so.
We need more people to join this struggle and we need to do a good job of publicising everytime we do get a win! I hope Fuel Poverty Action will be working with you or your group soon. Contact us! [email protected] 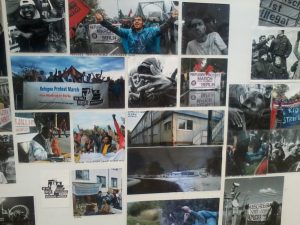 Photos at the refugee centre in East Berlin, showing the struggle for refugees rights