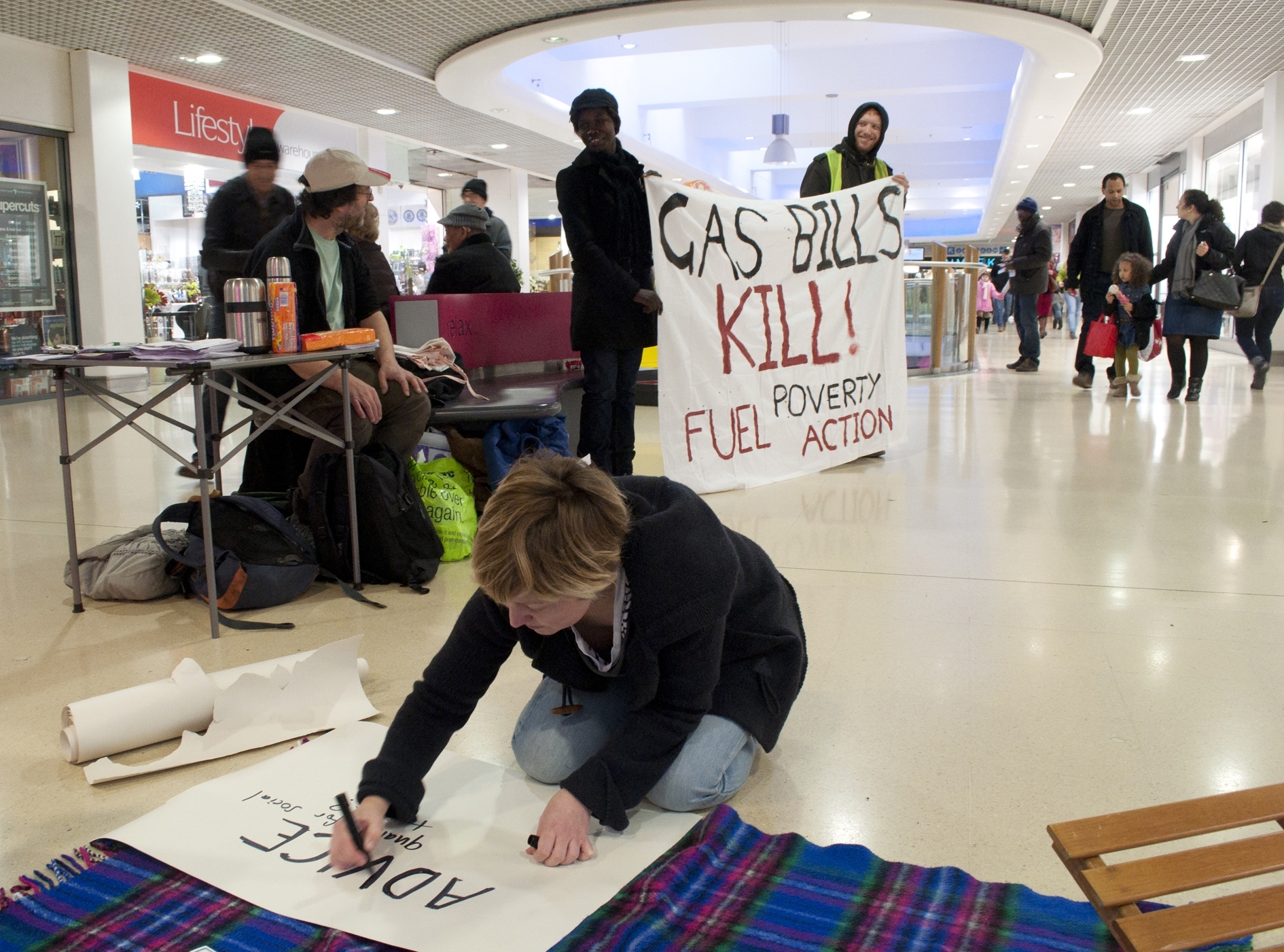 On Friday 27th – Monday 30th January, hundreds of people in cities across the country came out of their cold homes to Warm-up together at the buildings and offices that house those responsible for fuel poverty. People warmed-up at the offices of the energy companies raking in record profits from the thousands of people in the UK that die from fuel poverty, and the hundreds of thousands worldwide that die from climate change. The weekend also saw Warm-ups at local council offices and town halls. Local governments are failing to take action to rectify the shameful state of the UK’s housing and insulation, and are implementing welfare cuts that are making the bills bite even harder this Winter, leaving millions with a choice between heating and eating.
The Warm-ups brought a glimpse of the  community action that will be needed to tackle the Big Six’s monopoly and the government’s complicity. The weekend came as part of a growing movement for energy democracy and energy justice, emerging across the world from Nigeria to Russia to Greece. As corporations continue their drive to extract profit at all costs and governments sit comfortably in their pockets, people are becoming ever more cold and ever more angry. Together, we will Warm-up and build a democratic alternative that works for people’s needs, not corporate greed…

Throughout the hour-long lunchtime event the activists set up an advice stall on the first floor, held banners [NO MORE DEATHS FROM COLD and GAS BILLS KILL – FUEL POVERTY ACTION], distributed 500 leaflets and created a friendly space to encourage people to come and sit and share free hot drinks and snacks. There was a very positive reaction from the general public there, and the activists ignored attempts at harassment by security managers. The activists then visited the Wetherspoons Pub en masse to leaflet all the customers and talk to the manager there about these issues.
A spokesperson for the organisers said: ‘ Fuel poverty is a public scandal causing thousands of excess deaths each winter as the Big Six energy corporations rake in massive profits. People’s welfare must come first. We call on all shops, pubs and public buildings to welcome in all those who wish to get warm. ‘
Several Hackney residents also Warmed-up at the Hackney Town Hall. Protestors gathered with their sleeping bags and duvets,  joining thousands of other people nationwide accusing the government and energy companies of a “deadly obsession with making money.”
Caroline Allen, a Warm-up participant, said: “6.3 million homes are in fuel poverty in the UK, and it is estimated that around 2,700 people died last winter as a direct result of being ‘fuel poor’ – this is a shocking figure.
“What makes me even more angry is that these companies are making hundreds of millions of pounds of profit and paying their executives millions, while at the same time trying to push the blame for price rises onto much needed investment in green energy,” she added.
Photos of the Hackney warm-up can be found here.
****
Day 4 of the Warm-ups (Monday 30th January), the weekend’s finale, saw seven-hour occupations of meeting rooms on two floors of British Gas’s HQ. Read more here.

After police were unable to break through the occupiers’ barricades, British Gas management offered the protesters the opportunity to negotiate. Read their response here.
Outside the occupation, British Gas CEO Phil Bentley came out to meet protesters that were flyering British Gas workers. Read about Bentley’s shocking admission of the unfairness of his massive salary earned from leaving millions to freeze here.
****
The Warm-ups are just the beginning. Fuel Poverty Action will be continuing to challenge the Big Six’s monopoly and the government’s complicity, and keeping up the push for a democratic energy system that works for people’s needs, not corporate greed. Plans are already afoot for a day of mass action against the Big Six’s power in May. Follow us on Twitter, find us on Facebook and email [email protected] to get involved.