The following essay was first published by the Ecologist under a Creative Commons 4.0 licence. FPA’s Alexa Waud writes about insulation, retrofit, #MakingGreenComeTrue, and strengthening our demands 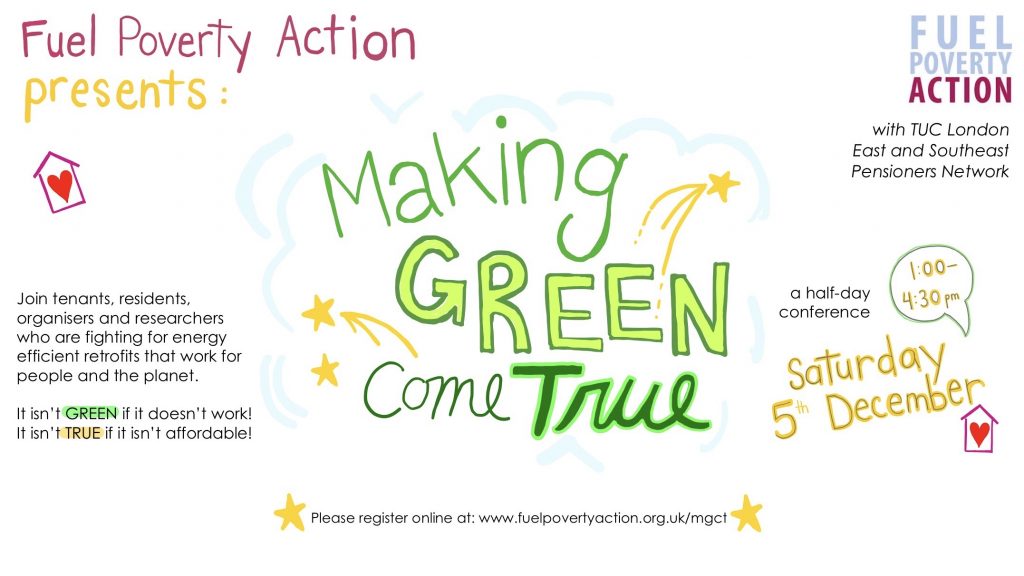 When I was preparing to move to the UK from Canada in 2017 I was repeatedly warned of the cold. Coming from a country where wind chill factors pull the winter temperature down to –30 ºC, these words of caution came as a surprise. “The dampness gets to your bones,” my friends and colleagues told me, “and worst of all, you can’t escape it. Homes in the UK have no insulation.” Then, just in advance of my move, Grenfell tower caught fire, its flames fuelled by toxic cladding. These parallel warnings – of decaying buildings and decaying accountability – made clear: many UK homes weren’t insulated, and when they were, it could be deadly.

In the last three years, the words insulation, cladding and energy efficiency retrofit have received increasing air-time. Echoing in Kensington’s community halls and broadcast as part of Green New Deal programming, they’ve found their way onto the agenda of building safety meetings and into the advice offerings of energy efficiency caseworkers. In these different settings, the words insulation, cladding and retrofit conjure up vastly different images. In the eyes of some, they are causing burning buildings and in the eyes of others preventing a burning planet. Some people see their potential in shaving a few pounds off unpayable energy bills. For others, the potential impact is less desirable: damaged health by toxic materials. These visions need not be at odds – homes that are safe for people and the planet are possible – and yet, these conversations are remarkably disconnected.

The grassroots campaign group Fuel Poverty Action, of which I am a part, has a unique perspective on these issues. Emerging from Climate Camp in 2011, our approach to climate organising has always addressed the challenges of affordability and accountability to residents head on.

At times, this is challenging. In late 2018, I remember listening to a Grenfell survivor’s impassioned speech to his community. “They are going to try to put insulation in your flats,” he said to the audience, “never let them!” At the same time, Fuel Poverty Action was working with tower block residents across the UK to get safe insulation on their buildings in an effort to protect against fuel poverty and deaths from cold.

Six months later we were feeding into Green New Deal drafts, calling for widespread retrofit to tackle climate change on a scale that matched the problem. Meanwhile, victims of bad retrofits were telling us how poor ventilation, damp, and mould ruined their health. And yet, others were telling us of a child at death’s door in a freezing new-build flat where the landlords had simply omitted insulation. Private renters also shared their fear of insulation. They wanted its warmth, cost saving and environmental benefits, but were afraid their already too high rents would rise further.

One such renter wrote to us,

“The man who came today to check the electrics told me I should have insulation and my landlord should do it for me, but I don’t know… My rent might go up and I can’t afford it. Particularly as a women pensioner. Because of all the discrimination we didn’t earn enough and we could never afford a mortgage. I know when I burn gas I’m burning fossil fuels and I’m very concerned about that. But I couldn’t use electricity. I wouldn’t be able to pay for it.”
Private renter, Kensington and Chelsea

It’s hard work to forge a path forward that takes account of these complex, and often conflicting, concerns. It means challenging the visions of the mainstream and even the leftist climate movements by grounding energy efficiency in people’s lives. It means prioritising existing, everyday struggles and building-up climate solutions from there. It means engaging in the unfolding debate seriously, and creating space for others to engage as well.

The event will bring together people who are fighting for insulation and people who are fighting against it. We’ll hear from those who know action on climate change is already coming too late, and those who know proper training takes time. Victims of bad retrofits will meet with trade unionists who have plans to fill the performance gap by fighting for high quality jobs in which high quality work can be completed.

Social housing tenants will discuss real questions with which they’ve been grappling. For example, one person registered for the conference asks,

“What do you do when you ask your social landlord to insulate and upgrade the environmental sustainability of your home – reducing your bills, but providing more warmth and using less fossil fuels – and they send an advisor who gives you a thermal blanket, gloves and a new gas boiler? So far, they do not appear to be interested in the urgent and imperative need to reduce carbon emissions from existing homes.”
Social housing tenant, Hackney

The conference slogan reads, ‘It isn’t green if it doesn’t work. It isn’t true if it isn’t affordable’. We will weave these lessons into the fabric of existing retrofit campaigns to broaden their mobilisation and strengthen their demands.

We’ve seen, through tragic consequences, how cost cutting costs lives. At the same time we must ask: where are the lives we are counting? The fight for energy justice is necessarily global. Petrochemical extraction, a precursor to plastic insulation, is an example of global injustice on multiple levels. What energy are we saving when the materials we use demand the continued extraction of fossil fuels? The cost is clear: oppression of people and destruction of environments around the world lock us further into climate change with unequal, deadly impacts.

Equally, if our homes continue to heat the streets, they’ll require more energy. Even if that energy comes from renewable sources, we should be careful about the amount we are demanding. Renewable energy infrastructure requires the mining of the rare earth metals that also wreaks havoc across the globe.

However, the choice between energy efficiency and global justice is a false one. The options are not either unabated climate change or action through profit driven supply chains. Instead, we can align our movements to find a different solution.

One example of a different solution can be found in broadening our understanding of green jobs. By bringing care workers – paid and unpaid – into the conversation, we can ensure retrofit work doesn’t deepen the traditional view that green jobs are exclusively industrial. When conversations about retrofit give weight to caring for our homes and the people in them, decisions begin to reflect the priorities of those, especially women, for whom the home is both a sanctuary and a workplace.

Upon receiving our invitation to the conference, a member of the Global Women’s Strike campaign commented on the description of bad retrofit jobs. “They lack care,” she said simply. With care, we can make homes fit for those of us who are not kings, and who may be pensioners, or disabled, or may be young children. With care we can future proof with low sills, wide doorways, manageable heating controls, and good air quality.

With my Fuel Poverty Action hat set aside, I often fall into the climate campaigner pattern of thought. With the urgency of the climate crisis and the draftiness of UK homes front of mind, I tend to see mass retrofit as a no-brainer solution. This conference will show that it does, in fact, require many brains, or rather a whole community of people thinking and grappling with retrofit’s challenging questions. Challenging questions about health, jobs, and ripple effects from the point of extraction all the way up to the atmosphere. We need to fight for both liveable homes and for a liveable planet, and attention to detail and the domestic will only strengthen our demands and our power.

Alexa Waud is an organiser and researcher based in Edinburgh. She is a director of Fuel Poverty Action, and works on urban climate justice issues with a focus on housing and democracy.