At 11am on Saturday local activists gathered at Brixton Reference Library to protest fuel poverty with a “Warm-Up”. After handing out leaflets and chanting slogans like “Warm homes are a right, Here to stay, Here to fight” in Windrush Square, they moved into the library and occupied the foyer for an hour. They sought to highlight that Lambeths’ libraries are a lifeline for many people, providing warmth, community, and access to vital services, and yet they’re threatened with closure. This will only exacerbate deaths from fuel poverty, which hit 43000 in the winter of 14/15, whilst the Big Six rip off the public by £1.7 billion a year. The action was called and organised by Fuel Poverty Action (FPA), Lambeth Pensioners Action Group (LAMPAG), Lambeth Older Peoples Alliance (LOPA) and Myatts Field South Tenants and Residents Association (MFS TRA). 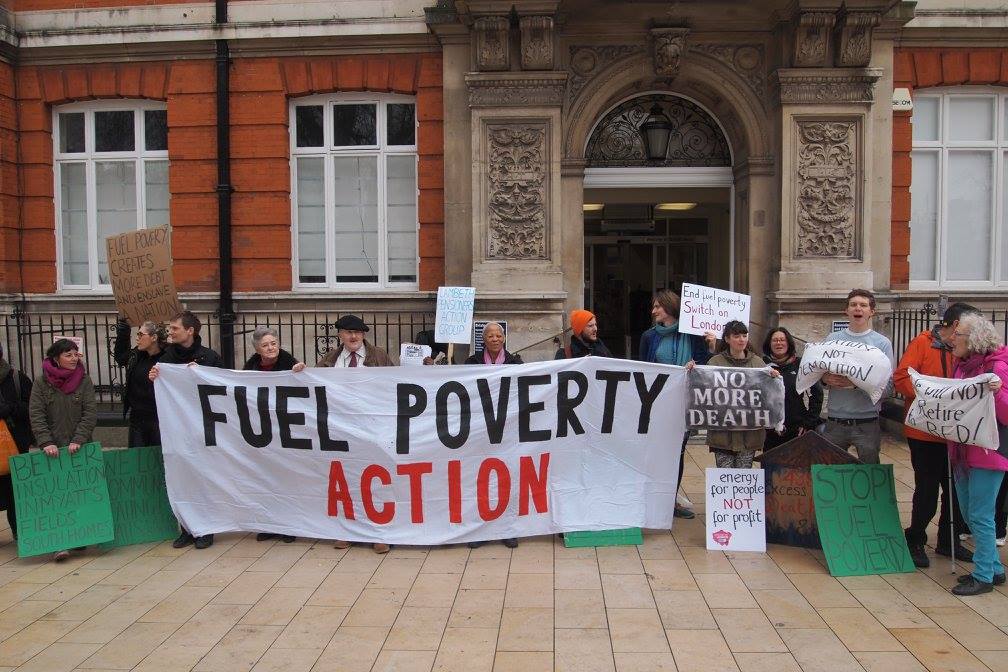 In the library we heard from a diverse set of speakers, which demonstrated the many intersections between the inability of vulnerable people to afford heating, the struggles taking place on estates across London as energy providers and councils intimidate residents, and the closures facing Lambeths’ libraries, lunch clubs, community centres and other public spaces, where people now keep warm, meet friends, and get informed.
Ellen Lebethe from LAMPAG said the closure of day centres for the elderly leads to increased isolation. She stated that pensioners are forced to “choose between heating and eating”, leading to the death of 43,000 people last year which is “a scandal in one of the richest economies in the world”. Ellen went onto emphasise that fuel poverty was “a people problem” not “a pensioner problem” as the ramifications of this lead to a further strain on our already struggling NHS.
In a pertinent example of the impact access to energy has on communities, the group also heard from Lucy Williams of MFS, a housing estate where Lambeth Council are attempting to force individual boilers on residents to replace a communal boiler system that has served them successfully for decades. Injunctions have been served to those refusing to accept this, but many are still resisting. Lucy emphasised that they “should not be pushed into fuel poverty”, with fellow resident Olga Molinaro passionately concluding that this type of debt enslaves a nation. 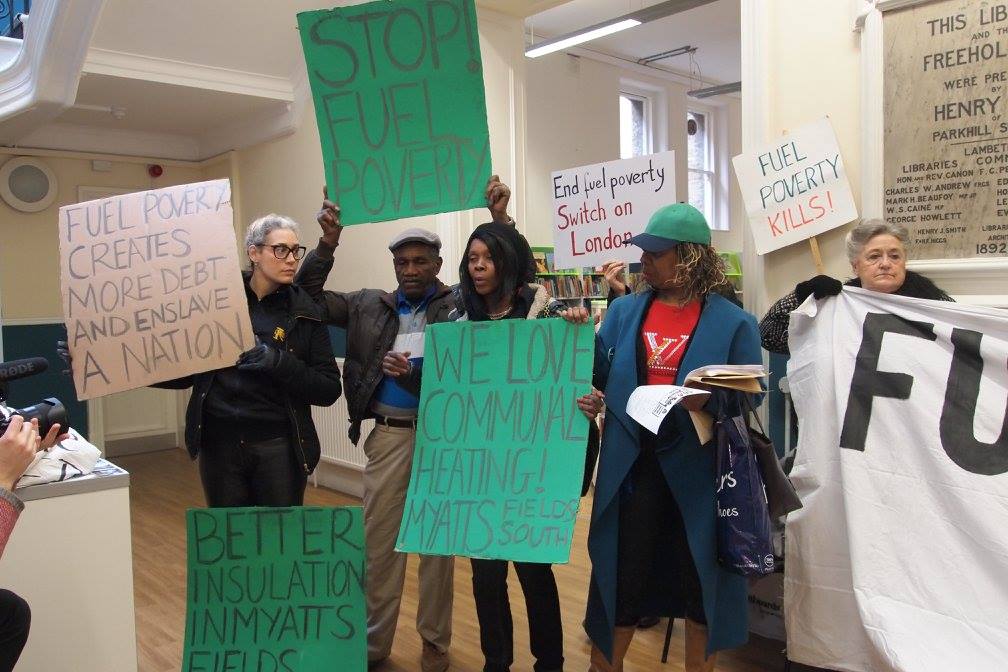 Lambeth Council are facing a 56% cut to their budget. But Warm-Up speakers said they were choosing to bully through policies that hit the most vulnerable, especially in the context of welfare benefit cuts, and often don’t even save money. Valerie Lindo and Laura Swaffield of Friends of Lambeth Libraries campaign discussed how “saving our libraries will cost less than destroying them”, with Valerie highlighting the necessity of libraries to provide a safe working environment with free access to books. The plan to replace them with private gyms encapsulates the removal of lifelines for those that cannot afford to pay their electricity bills and/or personal broadband connections, for example.
And an alternative to fuel poverty is possible: well insulated homes that are powered by democratically controlled and community-owned renewable energy sources. Until then, we will continue to reclaim our public spaces in the face of privatisation and ideological austerity, because, as Ruth London from FPA highlighted, “if we can’t afford to heat our own homes … we have a right to warm up in any public space we choose”. We will not be made invisible.
The action was supported by Friends of Lambeth Libraries, ActivecareUK for Mental Health Well-Being, Disabled People Against Cuts (DPAC), Lambeth DPAC, Lambeth Asian Centre, Vassall and Coldharbour Forum, Reclaim the Power, Single Mothers Self-Defence, Switched on London and WinVisible.
# # #